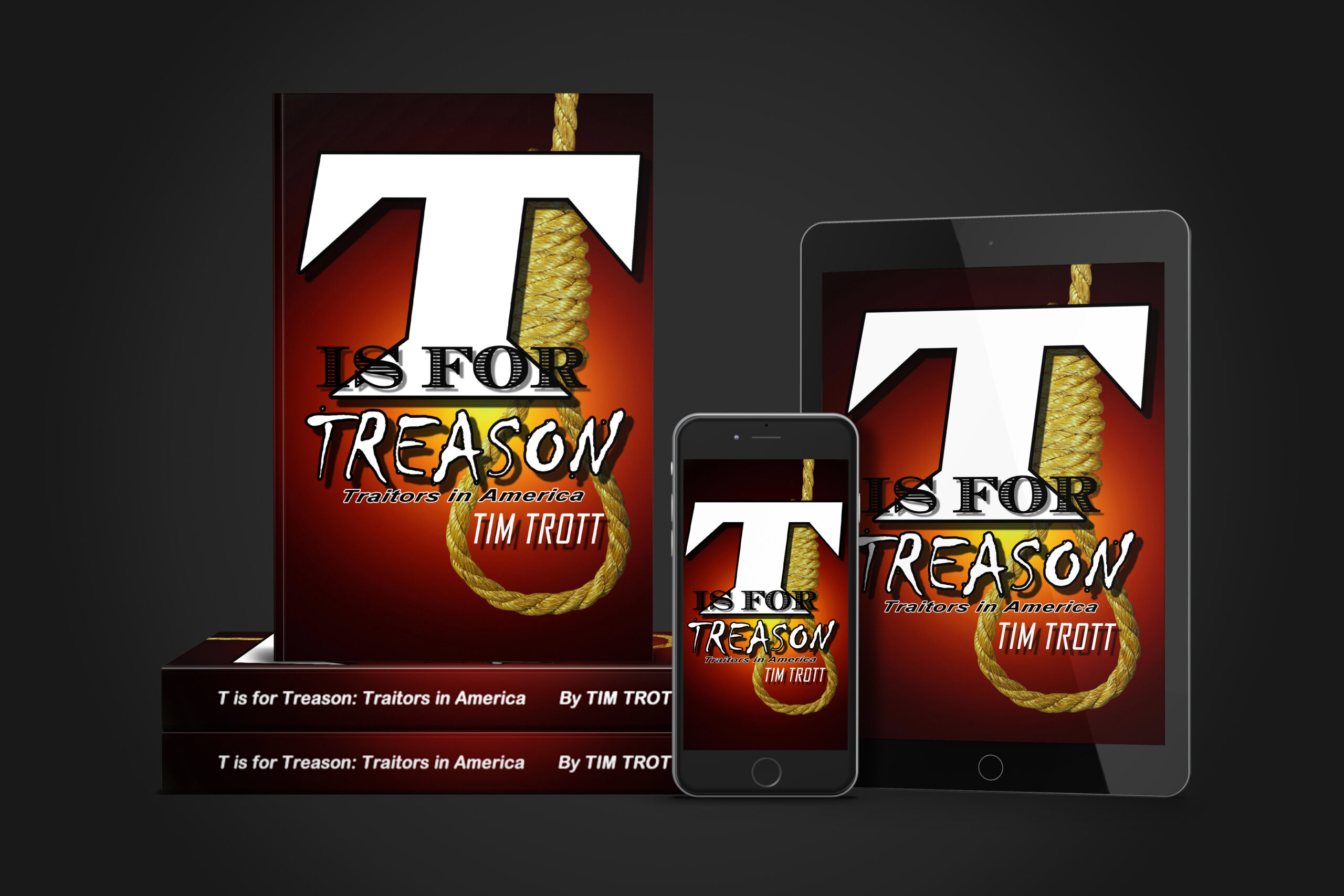 T is for Treason:

Traitors in America
As timely as today's headlines...

GET YOUR COPY HERE:

Tim Trott has always had a love for writing and teaching.  ast forward to 2016, when his fascination with drones led to purchase of a DJI Phantom 2, and writing about the experience in The Droner’s Guide, which was replaced by FAA Remote Pilot Study Guide a year later, and expanded to online training at TheDroneProfessor.com.

Still on the aviation theme, Tim wrote about Kirby Grant, the star of the 1950’s television series, “Sky King” in Out of the Blue.  Tim became acquainted with Kirby through a mutual friend when the Grant family moved to Central Florida in 1971.

Tim is also involved with hosting and designing web sites, and has used that experience to write Guarding Against Online Identity Theft, with a Spanish translation, in 2022.  Now retired and living on Florida’s East Coast, and still staying with the non-fiction trend, T is for Treason traces the history of that topic from Benedict Arnold to the present day.

I find .. interesting … the author’s description of “Treason” … was mind-opening and insightful.

The author succinctly demonstrated an act of crime in the book by looking into different treason stories. I never really understood the full context of treason until I came across this book. Another important point to note was the accuracy of the book. All the crimes of treason treated in the book were precise. I was immensely impressed by the author’s coordinated and articulated manner in writing a book in this context.

I just finished T is for Treason… Wow! I couldn’t put it down. Great details and history. EXCELLENT!

Very interesting read. A lot of things I was not aware of.

Here’s where to look!

Introduction
The Art of the Steal

We may think we know what treason is, but laws are written, and over time they are defined through revisions and court cases.

In 1542, King Henry VIII accused one of his eight wives of having affairs before their marriage and of adultery, so he charged her with treason and poor Queen Catherine was executed. George Washington was guilty of treason against England. Donald Trump accused two FBI agents of treason for investigating his ties to Russia. Some believe that the participants in the January 6th Capitol riot were traitors for attacking Congress, but so far none have been charged with treason.

Treason is broadly defined as the crime of “betraying one’s country by attempting to overthrow the government through waging war against the state or by materially aiding its enemies”. The three key elements necessary for an offense to constitute treason include (1) an obligation to the legal order, (2) the intent and (3) action to violate that obligation.

President Johnson thought Richard Nixon was guilty of treason. Both Reagan and George Bush may have committed treason in their secret dealings with Iran. There may be some members of Congress today whose loyalty to their oath of allegiance to the United States could be called into question.

That leaves many questions. Does treason require a formal declaration of war? Can a spy be guilty of treason? Would someone need to be a citizen to be charged with treason in the U.S.? Are there different kinds of treason?

To find the answers, it is important to understand the history of treason in the United States, and what defines treason in a legal sense. We need to know how that definition has changed over time, and how that definition has been applied in court. In that way, we are approximating the way a prosecuting attorney or judge might apply the law. In the following pages, we will let you be the judge.

There are books, news reports, YouTube videos, newspaper articles, podcasts, and television programs addressing the subject of treason. Often there have been misrepresentations and details that were overlooked. But once we find the missing pieces, we can begin to complete the puzzle to reveal the big picture of what treason really is.

We will present several stories about treason that you may THINK you know, only to discover some disturbing details. There are also stories of treason that are less known. By viewing treason through the telescope of history, looking back through time, we can better understand what treason is, and how it may or may not be applied to current events.

It is hoped that this book will show the link between past attacks on our democracy and the threats we face today.

Out of the Blue

The Life and Legend of Kirby- SKY KING – Grant

REVISED and UPDATED with the new rules

So You Want To Write A Book…

Would you be interested in a preview copy of this book? The author is making a limited number of copies available for people who would like to have access to a pre-release copy of this book. An ARC is “Advanced Reader/Review Copy”.  Distribution of reader/review copies is a common practice among authors to spark interest …

The name most closely associated with the word Treason is Benedict Arnold. It may surprise you to know that Arnold was never charged or convicted of treason. The only person sentenced on a Federal charge of treason was William Mumford. You’ve probably never heard of that name, and you may be surprised to learn what …